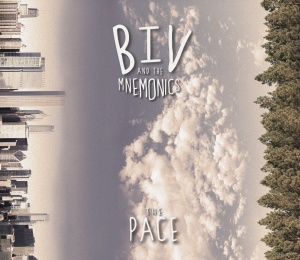 San Francisco, CA – After four years of playing shows and gaining fans in the Bay Area and beyond, San Francisco band Biv and the Mnemonics is proud to release their 2nd full-length album, ‘The Pace’, on April 16th, 2013. The band, formerly known as Roy G Biv & The Mnemonic Devices, has produced a ten-track collection of quality songs and energetic harmonies evocative of the great folk-tinged rock of the past, while providing their own unique energy that can’t be resisted. ‘The Pace’ is an exciting and imminently listenable album; it’s warm, full of catchy melodies and hooks, and brimming with well-thought-out harmonies and eclectic instrumentation. TheBayBridged.com calls Biv and the Mnemonics “a folk rock band that owns a refreshingly uncalculated, cool style,” while SFAppeal.com calls ‘The Pace’ “a happy-go-lucky jaunt of indie folk goodness.”

College friends Dan Paggi and Ben Lang initially formed Biv and the Mnemonics in 2007, shortly after moving to San Francisco from the Northern California city of Chico. Their years spent there soaking in long summer days full of good times and a surprisingly vibrant music culture had an undeniable effect on their musical output, and their first collaboration together, 2009’s ‘The Blue Orange’, established the DNA of the group they would go on to create. They have since formed a cohesive and dynamic unit with Evan Wardell on guitar, Jessie Alsop on Keys and Vocals, and Landon Moblad on drums.

An instant connection sparked between the five, their synergy together producing a band whose laid-back sound celebrates the simple pleasures of life, and has been compared to artists ranging from The Kinks to Pavement and Dr. Dog. It’s this carefree energy that led to the creation of their admittedly odd moniker, a play on the acronym Roy G Biv (BIV being comprised of Blue Indigo Violet, as you may remember from your grade school science class).

Biv and the Mnemonics have spent the years since ‘The Blue Orange’ crafting their sound and playing shows throughout Northern California. With the help of Andrew Tavis and the Mission Street Recording Company (www.missionstreetrecording.com), the group entered the studio in 2011 to begin production on ‘The Pace’, their first LP effort as a full band. The result is an upbeat and melodic combination of ’60s rock, homegrown folk, a little country twang and funky, punk-ish rhythms that all manages to sound both warmly familiar and refreshingly new.

The quintet will be touring the Pacific Northwest throughout 2013, and has released singles from the album available for streaming at: http://www.soundcloud.com/bivandthemnemonics.
If you’d like to know more please visit them at:
http://www.bivband.com
http://www.facebook.com/bivband

To purchase Biv and the Mnemonics – ‘The Pace’ CD: http://www.bivandthemnemonics.bandcamp.com

For more Information, Promotional Requests or to set up an Interview, please contact: Billy James at Glass Onyon PR at 828-350-8158 or via e-mail at glassonyonpr@gmail.com

For US distribution inquiries, please contact Steffen Franz or Ben Lang at Independent Distribution Collective, telephone: 415-292-7007 or via e-mail at sales@independentdistro.com

This entry was posted on Monday, April 1st, 2013 at 20:02 and posted in Biv and the Mnemonics, Press Release. You can follow any responses to this entry through the RSS 2.0 feed.
« Punk Legends The Vibrators Celebrate 37 Years Of Punk Mania With New CD Release ‘On The Guest List’
World Music’s Badi Assad Back In The U.S. With A Modern Vocal Brazilian/Flamenco Guitar Release With Lush Arrangements & English Versions ‘Between Love & Luck’ Street Date: May 14th »

One response to “Indie-Rock/Alt-Folk Quintet Biv and the Mnemonics To Release New Full Length LP, ‘The Pace’ – A Top Notch Sophomore Effort From the Bay Area’s Best-Kept Secret”