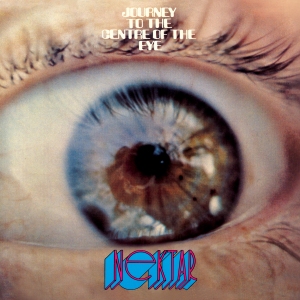 Los Angeles, CA – Space Rock fans rejoice! Purple Pyramid Records will be releasing a Special Collector’s Re-issue of ‘Journey To The Centre Of The Eye’, the classic 1971 debut album by UK progressive rock legends Nektar on February 26, 2013. This Sci-Fi themed masterpiece showcases a younger, spacier and more psychedelic Nektar. The CD will include the original album mix fully remastered, original liner notes by famed rock biographer Dave Thompson and a bonus CD featuring a vintage live performance of the entire album! This re-issue kicks off a series of Nektar catalog releases that will culminate with the release of a new studio album, ‘Time Machine’ coming this summer 2013.

Says guitarist/vocalist and founding member Roye Albrighton about ‘Journey To The Centre Of The Eye’, “Basically, it’s a journey to one’s inner-self, and to be able to see the world through your mind’s eye. Recorded in the early years of multi-track tape recording…this whole album was recorded on an 8-track recorder. We had to record each 20-minute piece complete and hope we didn’t make any mistakes… If we did, it was back to the beginning to start again.”

The Nektar story is a remarkable one. A British rock band that found stardom and major success in Germany and the USA, yet failed to make a significant breakthrough in their own country. With three gold albums under their belt (‘Remember The Future’, ‘Down To Earth’ and ‘Recycled’), Nektar produced some of the most original work of the seventies and eighties. In virtuoso guitarist Roye Albrighton Nektar had a charismatic front man who had shared a stage with Jimi Hendrix, in Allan “Taff” Freeman a unique keyboard player, in Derek “Mo” Moore a bass playing powerhouse and in Ron Howden a fluidity rarely found in a drummer. Fifth member Mick Brockett was not a musician, but was responsible for one of the most stunning light and visual shows ever to grace a rock stage. Nektar’s history appeared to have been written when they finally split in the eighties. Despite attempts to re-kindle the flame, the Nektar light, it seemed was out…until the year 2000. The new millenium saw the long awaited reunion tour of the classic line-up, to rave reviews and fantastic receptions. The light we thought was out, had in fact been kept aglow – by loyal fans across the globe!

An American tour in September 2004 saw Taff Freeman depart the band for personal reasons and his successor, Hammond virtuoso Tom Hughes, instantly earning a place in the hearts of the Nektar faithful. With continued concert dates, along with the remastering of the remainder of the Nektar back catalogue on CD, this legendary band has become once more a proud force to be reckoned with in the world of progressive music. In 2007 Nektar truly took over their own management, procured their official website as their own, became an entity entirely under their own control and went on a 22-date tour of Germany. The band released the critically acclaimed CDs ‘Book of Days’ in 2008 and the live DBL CD ‘Fortyfied’ in 2009. Signing with US label Cleopatra in 2011, the band competed it’s first U.S. Tour in seven years by virtue of a successful month-long jaunt of the States, to the delight of their U.S. Fans both old and new. The final Los Angeles date on this tour was captured on the Cleopatra Records 2012 DVD release ‘Space Rock Invasion’. In 2012, Nektar released ‘A Spoonful Of Time’ on Cleopatra Records; a psychedelic head trip through classic rock radio with artful twists on classics by The Doors, Pink Floyd, Rolling Stones, Blind Faith, Steve Miller, 10cc and others. Nektar is set to make its mark once again with the release of their highly anticipated forthcoming studio album ‘Time Machine’ this summer!

As far as future plans for Nektar: “To make more music, and to experiment more in different ways,” says Albrighton. Nektar will be a part of the Cruise to the Edge cruise in March with the Yes, Tangerine Dream, Saga, Steve Hackett – Genesis Revisited, Carl Palmer’s ELP Legacy, UK and others.

In conclusion Roye expounds about ‘Journey To The Centre Of The Eye’, “It’s a very unique album and stands alone in the Nektar archives. Many brand this as a ‘spacerock’ album…some a ‘Krautrock’ album…to us it is a Nektar album written and performed as we were in 1970.”

Nektar ‘Journey To The Centre Of The Eye’ is available for pre-order now at Amazon: http://www.amazon.com/Journey-To-The-Centre-Eye/dp/B00ATQRYFE/ref=sr_1_2?ie=UTF8&qid=1360356877&sr=8-2&keywords=nektar+journey

This entry was posted on Tuesday, February 12th, 2013 at 23:04 and posted in Nektar, Press Release. You can follow any responses to this entry through the RSS 2.0 feed.
« Prog-Folk Legend Judy Dyble Releases The Third Masterpiece Of Her Career In The USA, A Mere 45 Years After The Last
All-Digital Release for Rideshare First Feature Film Shot Entirely On the iPhone »